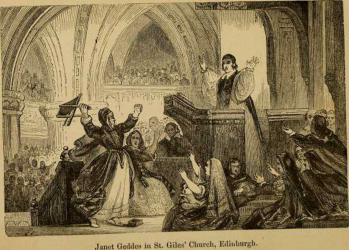 NOTE: Jenny Geddes (c.1600 – c.1660) was a cabbage grocer at the local market, in Edinburgh.  One day, she’d had enough and threw her stool at the head of the minister.
…The act sparked a riot which led to the Wars of the Three Kingdoms including the English Civil War.

…and this was to be done on the 23rd of July, 1637. On that day a great concourse of people, including the Lord Chancellor and the Archbishop of St. Andrews, along with several members of the Privy Council, the Judges of the Supreme Court, the Magistrates of the City, and a great multitude of the citizens, assembled in the church of St. Giles, then called the “Great Church,” to witness the ceremony. In the morning the usual prayers had been read from the old Book of Common Order. The Dean of Edinburgh, in his surplice, was to read the new service, and the Bishop of Edinburgh was to preach.

As soon as the Dean took his place in the reading-desk, and opened the obnoxious volume, a murmur arose in the congregation, and on his proceeding to announce the collect for the day, an old woman, named Janet Geddes, who kept a green grocer’s stall in the High Street, is said to have exclaimed,

“De’il gie you colic, the wame o’ ye,
fause thief; daur ye say Mass in my lug?”
meaning
“Devil give you colic in your stomach,
false thief: dare you say the Mass in my ear?”

She then flung the stool on which she had been sitting at the Dean’s head!

A scene of uproar and confusion immediately ensued. A crowd, consisting principally of women, rushed to the desk with loud menaces, and the Dean, in great alarm, threw off his surplice and fled.

The Bishop of Edinburgh then ascended the pulpit and attempted to restore order, but without effect. A volley of sticks and other missiles was hurled at him, accompanied with cries of “A pope!   A pope! …Stone him!   Stone him!” So that he could not be heard. “The gentleman,” says a contemporary writer,” did fall a-tearing [weeping], and crying that the mass was entered amongst them, and Baal in the church.

There was also a gentleman who was standing behind a pew and answering ‘amen’ to what the Dean was reading. A she-zealot, hearing him, starts up in choler. ‘Traitor,’ says she, ‘does thou say mass at my ear?‘ And with that struck him in the face with her bible in great indignation and fury.”

The rioters were at length expelled from the church, and the doors having been bolted, the Dean emerged from his hiding-place and resumed the service. It was rendered almost inaudible, however, by the shouts of the mob without, who battered at the door, and shouted, “A pope!   A pope!   Antichrist! Pull him down!” and other exclamations of the same sort. At the close of the service, the Dean made his escape unnoticed; but the Bishop of Edinburgh, who was very unpopular, was threatened and assailed by the populace, and was with difficulty rescued from their hands.

Here is some additional history of a Protestant Christian variety and part of your Christian heritage:  Since the early years of the 17th century, the Scottish Church had been established on the same Episcopalian basis as its English cousin, but was far more puritan, both in doctrine and practice. In 1633 King Charles I came to St Giles’ to have his Scottish coronation service, using the full Anglican rites, accompanied by William Laud, his new Archbishop of Canterbury. In the years that followed he began to consider ways of introducing Anglican-style church services on Scotland. The King arranged a Commission to draw up a prayer book suitable for Scotland, and in 1637 an Edinburgh printer produced:

The BOOKE OF Common Prayer
AND Administration Of The Sacraments:
And other parts of divine Service
for the use of the CHURCH OF SCOTLAND.

These developments met with widespread opposition.

The first use of the prayer book was in St Giles’ on Sunday 23 July 1637, when James Hannay, Dean of Edinburgh, began to read the Collects, part of the prescribed service, and Jenny Geddes, a market-woman or street-seller, threw her stool straight at the Minister’s head.

Some sources describe it as a “fald stool” or a “creepie-stool” meaning a folding stool as shown flying towards the Dean in the illustration, while others claim that it was a larger, three-legged cuttie-stool.

This was the start of a general tumult with much of the congregation shouting abuse and throwing Bibles, stools, sticks and stones. Prebble reports the phrase “Daur ye say Mass in my lug?” as being addressed to a gentleman in the congregation who murmured a dutiful response to the liturgy, getting thumped with a Bible for his pains, and describes Jenny as one of a number of “waiting-women” who were paid to arrive early and sit on their folding stools to hold a place for their patrons. The rioters were ejected by officers summoned by the Provost, but for the rest of the service hammered at the doors and threw stones at the windows.

More serious rioting in the streets (and in other cities) followed, and the Provost and magistrates were besieged in the City Chambers, to the extent that it became necessary to negotiate with the Edinburgh mob. At the suggestion of the Lord Advocate it appointed a committee known as the Tables to negotiate with the Privy Council. Characteristically, Charles turned down the Tables’ demands for withdrawal of the Anglican liturgy and more riots ensued with talk of civil war. This led to widespread signing of the National Covenant in February 1638, with its defiance of any attempt to introduce innovations like the Prayer Book that had not first been subject to the scrutiny of Parliament and the General Assembly of the Church. In November of the same year, the bishops and archbishops were formally expelled from the Church of Scotland, which was then established on a full Presbyterian basis. Charles reacted by launching the Bishops’ Wars, thus beginning the Wars of Three Kingdoms.

Story taken from, “The Religious Anecdotes of Scotland.”
Biographical excerpts taken from Wikipedia

One thought on “ITS WAR AT CHURCH ! … Jenny Geddes throws her stool at the Pastor”