Adapted from “The Truth War”
Written by John MacArthur
Slightly edited for context.

Is uncertainty the new truth? Most postmodernists seem to think so. They definitely equate certainty with arrogance.

The belief that no one can really know anything for certain has emerged as virtually the one dogma postmodernists will tolerate. Uncertainty is the new truth. Doubt and skepticism have been canonized as expressions of humility. Right and wrong have been redefined in terms of subjective feelings and personal perspectives.

Those views are infiltrating the church too.

In some circles within the visible church, cynicism is now regarded as the most splendid of all virtues.

A relentless tone of angst about too much certainty pervades every postmodern faction within modern churches. No wonder the emerging church began as a self-conscious effort to make Christianity more suitable to a postmodern culture. Emerging Christians were determined to adapt the Christian faith, the structure of the church, the language of faith, and even the gospel message itself to the ideas and rhetoric of postmodernism.

The central propositions and bedrock convictions of biblical Christianity —such as firm belief in the inspiration and authority of Scripture, a sound understanding of the true gospel, full assurance of salvation, settled confidence in the lordship of Christ, and the narrow exclusivity of Christ as the only way of salvation—do not reconcile well with postmodernism’s contempt for clear, authoritative truth claims. The medium of postmodern dialogue thereby instantly and automatically changes the message. And the rhetoric of the Emerging church movement reflected that.

Brian McLaren summed up his views on orthodoxy, certainty, and the reliability of Christian truth claims by saying:

How ironic that I am writing about orthodoxy, which implies to many a final capturing of the truth about God, which is the glory of God. Sit down here next to me in this little restaurant and ask me if Christianity (my version of it, yours, the Pope’s, whoever’s) is orthodox, meaning true, and here’s my honest answer: a little, but not yet. Assuming by Christianity you mean the Christian understanding of the world and God, Christian opinions on soul, text, and culture . . . I’d have to say that we probably have a couple of things right, but a lot of things wrong.

McLaren suggested that clarity itself was of dubious value. He clearly preferred ambiguity and equivocation, and his books are therefore full of deliberate doublespeak. In his introduction to A Generous Orthodoxy, he admitted, I have gone out of my way to be provocative, mischievous, and unclear, reflecting my belief that clarity is sometimes overrated, and that shock, obscurity, playfulness, and intrigue (carefully articulated) often stimulate more thought than clarity.

A common theme that runs throughout most of McLaren’s writings is the idea of great danger in the quest to be right.

Postmodern influences have come into the evangelical movement through other avenues as well. Beyond Foundationalism: Shaping Theology in a Postmodern Context, by Stanley Grenz and John Franke, was published in 2001 and made a significant impact in the evangelical academic community, garnering lots of positive reviews and stimulating numerous papers and lectures from evangelical leaders who evidently found much to agree with in the book.

But as the subtitle suggests, the book pleads for a whole new approach to theology, with the goal of “contextualizing” Christianity for a postmodern culture. “The categories and paradigms of the modern world” are in collapse, the authors note in the book’s opening sentence.  They go on to assert that Christian theology therefore needs to be rethought, revised, and adapted in order to keep in step and remain relevant in these changing times.

Grenz and Franke argue that the Spirit of God speaks through Scripture, tradition, and culture, and theologians must seek to hear the voice of the Spirit in each one. Moreover, since culture is constantly in flux, they say, it is right and fitting for Christian theology to be in a perpetual state of transition and ferment too. No issue should ever be regarded as finally settled.

The obvious casualty of all this is any sure and certain knowledge of biblical truth. That is okay with Grenz and Franke. They are convinced that every desire to gain a fixed and positive knowledge of any truth actually belongs to the collapsing categories of enlightenment rationalism.

Certitude naturally comes under repeated attack in the book. This culminates in the incredible claim that certainty is ultimately incompatible with hope.  Of course, there are some things we don’t yet see clearly and still hope for (Romans 8:24–25). But it seems rather far-fetched to conclude that there is nothing we can know with a true and settled certainty.

Some readers have nevertheless found the Grenz-Franke argument persuasive, including John Armstrong. Armstrong is a writer, conference speaker, and former pastor who at one time was a defender of Reformation theology and a student of revival. The name of his ministry, Reformation and Revival, reflected that.

But after reading Beyond Foundationalism, Armstrong wrote a series of articles in his ministry newsletter declaring that he has changed his mind about several vital points of doctrine—including faith and understanding, the sacraments, the doctrine of revelation, and Christology—among other things. Crediting Grenz and Franke for helping him see the light, Armstrong wrote, “I have been forced, upon deeper reflection about theological method, to give up what I call epistemological certitude.” He goes on to explain:

Reformed dogmaticians and teachers on the conservative side seek a steady, unshakable and certain knowledge…. John Franke suggests that the agenda employed by such theologians “glorifies reason and deifies science.” I have changed my mind about the way to do theology, and I confess I now agree with Franke’s conclusion.

Armstrong revealed how far he had moved from his starting point with this statement:

“If there is a foundation in Christian theology, and I believe that there must be, then it is not found in the Church, Scripture, tradition or culture.” If Scripture is not the foundation for Christian doctrine, then what is? Armstrong’s answer echoes the central thesis of Beyond Foundationalism: “If we must speak of ‘foundations’ for Christian faith and its theological enterprise, then we must speak only of the triune God as disclosed in polyphonic fashion through Scripture, the church, and even the world.”

The Gift of Truth

Armstrong, Grenz, Franke, and the emerging postmodernists have blurred the line between certainty and omniscience. They seem to presume that if we cannot know everything perfectly, we really cannot know anything with any degree of certainty. That is an appealing argument to the postmodern mind, but it is entirely at odds with what Scripture teaches: “We have the mind of Christ” (1 Corinthians 2:16).

That is not to suggest, of course, that we have exhaustive knowledge. But we do have infallible knowledge of what Scripture reveals, as the Spirit of God teaches us through the Word of God: “We have received, not the spirit of the world, but the Spirit who is from God, so that we might know the things freely given to us by God” (1 Corinthians 2:12).

The fact that our knowledge grows fuller and deeper —and we all therefore change our minds about somethings as we gain more and more light—doesn’t mean that everything we know is uncertain, outdated, or in need of an overhaul every few years. The words of 1 John 2:20–21 apply in their true sense to every believer: “You have an anointing from the Holy One, and you all know. I have not written to you because you do not know the truth, but because you do know it, and because no lie is of the truth.”

The message coming from post modernized evangelicals is exactly the opposite: Certainty is overrated. Assurance is arrogant. Better to keep changing your mind and keep your theology in a constant state of flux.

By such means, the ages-old war against truth has moved right into the Christian community, and the church itself has already become a battleground—and ominously, precious few in the church today are prepared for the fight. 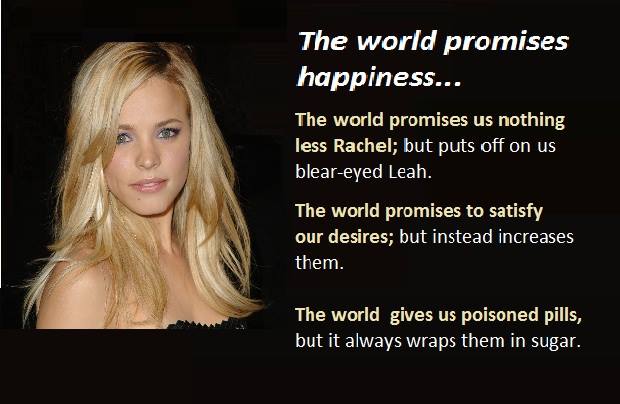 Those that want the honors of the world, want the temptations of it.

The world is “Blandus Daemon,” a flattering enemy. It is given to some as Michal to David, for a snare.

The world shews its two breasts of pleasure and profit, and many fall asleep with these breasts in their mouth. The world never kisses us, but with an intent to betray us. It is a silken halter.

The world is no friend to grace; it chokes our love to heavenly things: the earth puts out the spiritual fire. Naturally we love the world, Job 31: 24. ‘If I have made gold my hope;’ the Septuagint renders it, ‘If I have been married to my gold.’ Too many are wedded to their money; they live together as man and wife. O let us take heed of being entangled in this pleasing snare.

Many who have escaped the rock of scandalous sins, yet have sunk in the world’s golden quicksand. The sin is not in the using of the world, but in the loving, 1 John 2: 15. ‘Love not the world.’ If we are Christians, we must offer violence to the world. Believers are ‘called out of the world:’ they are in the world, but not of it, John 17.

As we say of a dying man, he is not a man for this world. A true saint is crucified in his affections to the world, Gal. 6: 14. He is dead to the honors and pleasures of it. What delight does a dead man take in pictures or music? Jesus Christ gave himself ‘to redeem us from this present evil world,’ Gal. 1:4. If we will be saved, we must offer violence to the world.

The world promises happiness. It promises us nothing less than Rachel, but puts off on us blear-eyed Leah:’ it promises to satisfy our desires, but instead increases them: it gives us poisoned pills, but it always wraps them in sugar.