Taken from “Faith and Life.”
Written by B. B. Warfield

“Restore unto me the joy of thy salvation.”

“and David said unto Nathan, I have sinned against the Lord. And Nathan said unto David, The Lord also hath put away thy sin.”

It may almost seem that David escaped from his crime too easily. We may read the narrative and fail to observe the signs of that deep contrition which such hideous wickedness when once recognized surely must engender. There is the story of the sin drawn in all its shocking details. Then Nathan comes in with his beautiful apologue of the ewe-lamb, and its pungent application. And then we read simply: “And David said unto Nathan, I have sinned against The Lord. And Nathan said unto David, The Lord also hath put away thy sin.” After that comes only the story of how the child of sin was smitten, and how David besought the Lord for its life and finally acquiesced in the Divine judgment.

One is apt to feel that David was more concerned to escape the consequences of his sin than to yield to the Lord the sacrifices of a broken and a contrite heart. Does it not seem cold to us and external, David’s simple acknowledgment of his sin, and the Lord’s immediate remission of it? We feel the lack of the manifestations of a deeply repentant spirit, and are almost ready, we say, to wonder if David did not escape too easily from the evil he had wrought.

It is merely the simplicity of the narrative which is deceiving us in this. The single-hearted writer expects us to read into the bare words of David’s confession, “I have sinned against the Lord,” all the spiritual exercises which those words are fitted to suggest and out of which they should have grown. And if we find it a little difficult to do so, we have only to turn to David’s penitential Psalms, to learn the depths of repentance which wrung this great and sensitive soul. One of them —perhaps the most penetrating portrayal of a truly penitent soul ever cast into human speech—is assigned by its title to just this crisis in his life; and I see no good reason why this assignment need be questioned. The whole body of them sound the depths of the sinful soul’s self-torment and longing for recovery as can be found nowhere else in literature; and taken in sequence present a complete portrayal of the course of repentance in the heart, from its inception in the rueful review of the past and the remorseful biting back of the awakened heart, through its culmination in a true return to God in humble love and trusting confidence, to its issue in the establishment of a new relation of obedience to God and a new richness of grateful service to Him.

Accordingly, the conception of the radicalness of the operation required for the Psalmist’s deliverance from sin, is equally developed.

No surface remedy will suffice to eradicate a sin which is thus inborn, ingrained in nature itself. Hence the passionate cry: Create—it requires nothing less than a creative act—create me a clean heart— the heart is the totality of the inner life;—and make new within me a constant spirit—a spirit which will no more decline from Thee. Nothing less than this will suffice—a total re-begetting as the New Testament would put it; an entire making over again can alone suffice to make such an one as the Psalmist knows himself to be—not by virtue of his sins of act which are only the manifestation of what he is by nature, but by virtue of his fundamental character—acceptable to Him who desires truth in the inward part; nay, nothing less than this can secure to him that steadfastness of spirit which will save his overt acts from shame.

It is only the saint who knows what sin is; for only the saint knows it in contrast with salvation, experienced and understood. And it is only the sinning saint who knows what salvation is: for it is only the joy that is lost and then found again that is fully understood. The depths of David’s knowledge, the poignancy of his conceptions—of God, and sin, and salvation—carrying him far beyond the natural plane of his time and the development of the religious consciousness of Israel, may be accounted for, it would seem, by these facts. He who had known the salvation of God and basked in its joy, came to know through his dreadful sin what sin is, and its terrible entail; and through this horrible experience, to know what the joy of salvation is— the joy which he had lost and only through the goodness of God could hope to have restored. In the biting pain of his remorse, it all becomes clear to him. His sinful nature is revealed to him; and the goodness of God; his need of the Spirit; the joy of acceptance with God; the delight of abiding with Him in His house. Hence his profound disgust at himself; his passion ate longing for that purity without which he could not see God. And hence his culminating prayer: “Restore unto me the joy of Thy salvation.”

Written by Samuel Rutherford.
Edited for thought and sense by Michael Pursley.

And, behold, a woman of Canaan came out of the same coasts,
and cried to him, saying, Have mercy on me,
O Lord, you son of David;
my daughter is grievously vexed with a devil.
—Matthew 15:22 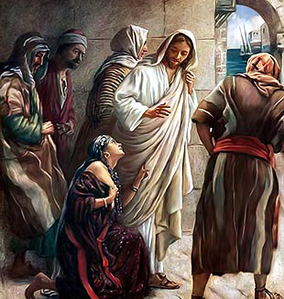 It is true he is called frequently the Son of man; but never when any prayeth to him: and he is reckoned, in his genealogy, David’s son. Abraham’s son, the Son of Adam; but the Son of David is his ordinary style, when prayers are directed to him in the days of his flesh.

1st. Christ had a special relation to Abraham, being his seed; but more special to David, because the covenant was in a special manner established with David…

Now, it was necessary, that Christ the Messiah should lineally descend of a king:  Abraham was not a king; Adam was not formally a king by covenant, as David was.

2nd, Christ changeth names with David, as he never did with any man.

That which I aim at is this:  Christ was a King by the covenant of grace…

…and the special party of the new covenant, as was David. The covenant is here a joint and mutual bargain between two, according to which, they promise freely such and such things each to other: hence God and man made up a solemn bargain in Christ.

Christ forced not his spouse to marry against her will, nor was God forced to make a covenant. Love and grace was that which led Christ’s hand at the pen, in signing the covenant with his blood.

As a cluster of stars maketh a constellation, a body of branches a tree, so a mass of promises concurreth in this covenant.

Wherever Christ is, clusters of divine promises grow out of him, as the motes, rays, and beams from the sun, and a family (as it were), and a society of branches out of a tree.

There is here giving and receiving.

Christ offereth and giveth such and such favours; we receive all by believing, except the grace of faith, which cannot be received by faith, but by free favour and grace, without us, in God. Grace, first and last, was all our happiness. If there had not been a Saviour (to borrow that expression), made all of grace, grace itself, we could never have had dealing with God.

The parties of the covenant are God and man.

Oh, how sweet! that such a potter, and such a former of all things, should come in terms of bargaining with such clay, as is guilty before him! Now, the parties here, on the one part, is GOD; on the other, the Mediator, Christ, and the children that the Lord gave him.

Observe: In the covenant of nature and works…

…God and his friend Adam were parties contracting; and in the second covenant, God, and his fellow, Christ, and all his, are parties. A covenant of peace cannot be between an enemy and an enemy, as they are such; those who were enemies, must lay down wrath, ere they can enter into covenant. Contraries, as contraries, cannot be united.

God being the sole author of this covenant, did lay aside enmity first.

Love must first send out love, as fire must cast out heat. It is true, this covenant is made with sinners, (as God made the covenant of nature with Adam, yet righteous,) but an union covenant-wise could never have been, except God had in a manner bowed to us, and grace proved out of measure gracious.

————————————
Meet the author and part of your Christian heritage:  Samuel Rutherford (c. 1600 – 30 March 1661) was a Scottish Presbyterian pastor, theologian and author, and one of the Scottish Commissioners to the Westminster Assembly.

Rutherford was educated at Jedburgh Grammar School and Edinburgh University, where he became Regent of Humanity (Professor of Latin) in 1623. In 1627 he was settled as minister of Anwoth in Kirkcudbrightshire,Galloway, where it was said of him ‘he was always praying, always,preaching, always visiting the sick, always catechising, always writing and studying’, and from where he was banished to Aberdeen for nonconformity, ‘being very powerful on the side of the Reformed faith and of God living’, there in Aberdeen, ‘his writing desk’, was said to be, ‘perhaps the most effective and widely resounding pulpit then in Christendom’. His patron in Galloway was John Gordon, 1st Viscount of Kenmure. On the re-establishment of Presbyterianism in 1638 he was made Professor of Divinity at St. Andrews.

Rutherford was chosen as one of the four main Scottish Commissioners to the Westminster Assembly of Divines in London taking part in in formulating the Westminster Confession of Faith completed in 1647, and after his return to Scotland he became Rector of St. Mary’s College at St. Andrews in 1651. Rutherford was a staunch Protester during the controversy in the Scottish Presbyterian church between the Resolutioners and Protesters in the 1650s, and at the Restoration of Charles II his Lex Rex was burnt by the hand of the common hangman, and the “Drunken Parliament” deprived him of all his offices and voted that he not be permitted to die in the college.

His epitaph on his tombstone concluded ‘Acquainted with Immanuel’s song’.