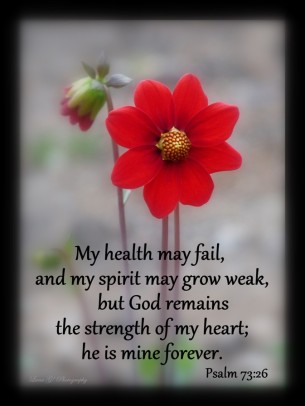 After the defeat of Montcontour, as they were carrying Admiral Coligny off the field, nearly suffocated by the blood of three wounds pouring into his closed visor, an old friend, who was being carried wounded beside him, repeated the first verse of this psalm,”

The historian adds, ‘That great captain confessed afterwards that this short word refreshed him, and put him in the way of good thoughts and firm resolutions for the future.’ If the whole psalm is read, it will be seen to be singularly suited to such an emergency; and so well were the psalms then known, that the first verse called up the whole.

Ver. 25. One of the most interesting records of the Covenanting time, is the diary of Mrs. Veitch, wife of one of the outlawed ministers who was imprisoned and exiled, and more than once in view of the scaffold. They survived all, and after the Revolution he became minister, first of Peebles and then of Dumfries, where he died. An extract from her journal may give some idea of the tenderness of heart that lay beneath the stern conscience of those times, and of the springs of simple faith in personal experience which refreshed and strengthened them in their endurance for principle.

She tells of the death of her third son, twelve years of age, with whom, and other children, she had taken refuge in Northumberland, while her husband and her older sons were in Holland. She saw the death of her child approaching, but feared that the thought of it was bitter to him. When in this state of anxiety she says, ‘One day, calling me to his bedside, he told me that the world had lost its attractions to him, and that he was resigned to die. I asked the reason of this, as his heart seemed to be otherwise set. He said that he had been praying and giving himself to Christ; that Christ had assured him of the delight he took in his soul, and this had comforted him. Afterwards he said, “Is it not a wonder that Jesus Christ should have died for sinners? Oh, this is a good tale, and we should think often on it.” He frequently repeated these words, “Whom have I in heaven but thee? And there is none upon earth that I desire beside thee,” which refreshed me,’ says his mother, ‘more than if I had been made heir of a great estate. Calling for his brother, who was at home, and his sisters, he blessed them all, and bade them farewell. On becoming unable to speak, he held up his hand while I spoke to him of death and heaven. At last, with his own hand he closed his eyes, and so we parted in hope of a glorious meeting.’

Ver. 26. ‘My flesh and my heart fails, but God is the strength of my heart, and my portion forever,’ was the last verse on which the thoughts of Charles Wesley rested, and with which his sanctified genius rose to higher notes among angels and ransomed spirits. His death was like his life. He called his wife, and bade her write to his dictation. It was the last of seven thousand hymns, some of them the finest in the English language, which had swelled from his heart day and night, wherever he moved.

In age and feebleness extreme,
Who shall a sinful worm redeem?
Jesus, my only hope thou art,
Strength of my failing flesh and heart ;
0, could I catch a smile from thee,
And drop into eternity!

Surely God is good to Israel,
to those who are pure in heart.
2 But as for me, my feet had almost slipped;
I had nearly lost my foothold.
3 For I envied the arrogant
when I saw the prosperity of the wicked.
4 They have no struggles;
their bodies are healthy and strong.[a]
5 They are free from common human burdens;
they are not plagued by human ills.
6 Therefore pride is their necklace;
they clothe themselves with violence.
7 From their callous hearts comes iniquity[b];
their evil imaginations have no limits.
8 They scoff, and speak with malice;
with arrogance they threaten oppression.
9 Their mouths lay claim to heaven,
and their tongues take possession of the earth.
10 Therefore their people turn to them
and drink up waters in abundance.[c]
11 They say, “How would God know?
Does the Most High know anything?”
12 This is what the wicked are like—
always free of care, they go on amassing wealth.
13 Surely in vain I have kept my heart pure
and have washed my hands in innocence.
14 All day long I have been afflicted,
and every morning brings new punishments.
15 If I had spoken out like that,
I would have betrayed your children.
16 When I tried to understand all this,
it troubled me deeply
17 till I entered the sanctuary of God;
then I understood their final destiny.
18 Surely you place them on slippery ground;
you cast them down to ruin.
19 How suddenly are they destroyed,
completely swept away by terrors!
20 They are like a dream when one awakes;
when you arise, Lord,
you will despise them as fantasies.
21 When my heart was grieved
and my spirit embittered,
22 I was senseless and ignorant;
I was a brute beast before you.
23 Yet I am always with you;
you hold me by my right hand.
24 You guide me with your counsel,
and afterward you will take me into glory.
25 Whom have I in heaven but you?
And earth has nothing I desire besides you.
26 My flesh and my heart may fail,
but God is the strength of my heart
and my portion forever.
27 Those who are far from you will perish;
you destroy all who are unfaithful to you.
28 But as for me, it is good to be near God.
I have made the Sovereign Lord my refuge;
I will tell of all your deeds.
——————————————-
Written by John Ker, D. D.
Taken from, “The Psalms in History and Biography,”
Wikipedia, and other sources.
Edited for thought and sense.