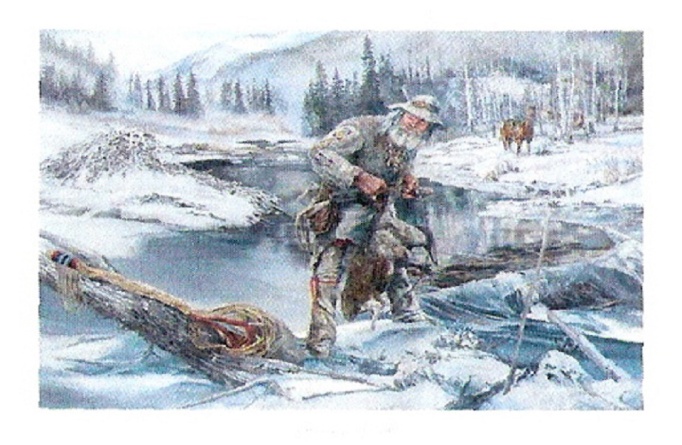 A couple of hundred years ago, the following anecdote was told to Dr. J. Todd by an old hunter in the forests of America…

“I had been out all winter alone trapping for furs. It was in March, when I was hunting beaver, just as the ice began to break up, and on one of the farthest, wildest lakes I ever visited. I calculated there could be no human being nearer than one hundred miles. I was pushing my canoe through the loose ice, one cold day, when just around a point that projected into the lake, I heard something walking through the ice. It made so much noise, and stepped so regularly, that I felt sure it must be a moose. I got my rifle ready, and held it cocked in one hand, while I pushed the canoe with the other. Slowly and carefully I rounded the point, when, what was my astonishment to see, not a moose, but a man, wading in the water—the ice water! He had nothing on his hands or feet, and his clothes were torn almost from his limbs. He was walking, gesticulating with his hands, and talking to himself. He seemed to be wasted to a skeleton. With great difficulty I got him into my canoe, when I landed and made up a fire, and got him some hot tea and food. He had a bone of some animal in his bosom, which he had gnawed almost to nothing. He was nearly frozen, and quieted down, and soon fell asleep. I nursed him like an infant. With great difficulty, and in a roundabout way I found out the name of the town from which he came. Slowly and carefully I got him along, around falls, and over portages, keeping a resolute watch on him, lest he should escape from me in the forest. At length, after nearly a week’s travel, I reached the village where I supposed he lived. I found the whole community under deep excitement, and more than a hundred men were scattered in the woods and on the mountains seeking for my crazy companion, for they had learned that he had wandered into the woods.

It had been agreed upon that if he was found, the bells should be immediately rung and guns fired; and as soon as I landed a shout was raised, his friends rushed to him, the bells broke out in loud notes, and guns were fired, and their reports echoed again and again in forest and on mountain, till every seeker knew that the lost one was found. How many times I had to tell the story over. I never saw people so crazy with joy; for the man was of the first and best families, and they hoped his insanity would be but temporary, as I afterwards learned it was. How they feasted me, and, when I came away, loaded my canoe with provisions and clothing, and everything for my comfort. It was a time and place of wonderful joy. They seemed to forget everything else, and think only of the poor man whom I had brought back.”

The old hunter ceased, and I said, ” Don’t this make you think of the fifteenth chapter of Luke, where the man who lost one sheep left all the rest and sought it, and brought it home rejoicing; and of the teaching of our Savior, that there is joy in heaven over one repenting, returning sinner?” “Oh, yes; I have often compared the two, and though I don’t suppose they ring bells and fire guns in that world, yet I have no doubt they have some way of making their joy known.”

My dear friend, may I add that if you are that lost person, the one wandering alone in the wilderness of sin, that there is a hunter looking for you! His name is Jesus, and he will not stop looking for you until he finds you. And when he finds you, all of heaven will rejoice! It will be the news piece of the heavenly air waves, angels will sing and cry with joy… over you! Will you not let Jesus find you? Will you not pray to him right now, Jesus save me!?! Yes! I pray that you will. Find me, Oh Lord Jesus!

“There is joy in the presence of the angels of God over one sinner that repents.” — Luke 15:10